Winter is over and the Australian shops have put up their Christmas decorations.

This can only mean one thing, 50 days until the Sydney Christmas Carnivals!!!

But unlike Christmas, have no fear.  The Christmas carnivals are smack dab in the middle of the track season.  And a perfect launch pad for perfecting speed before the National Championships and beyond.  You do not need to train for the carnivals, just bring your mid-season racing legs, and pop out the other side of the carnivals with all the form you need to kick ass in the second half of the track season.

2017 will be the 10th edition of the Sydney carnivals.  And although other states have a rich racing history, I feel Sydney has punched above it’s weight in producing Champions and future champions. 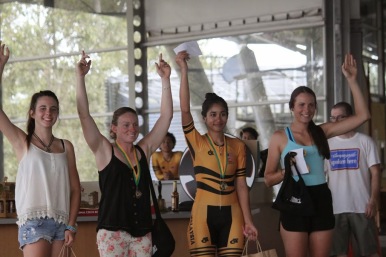 Here are some quick stats.

There have also been world class BMX and Mountain Bikers

Basically you don’t race the Sydney Carnivals to win a sash; you race them to train (and win all the glory later).

2017 is going to be bigger and better than ever!  Plans are already underway and I’m excited to announce that ENTRIES ARE OPEN!

Start Times: the below times apply for every day except Day 5 Sunday 31st, which will be 2:00pm to get ready for NYE.

Race Schedule: A-D grade in Men and A-C in Women (pending numbers).  Each day may vary however, will follow similar format:

2017 is shaping up to be another solid year with confirmation of the Malaysian Junior national team bringing a contingent of females.  We are also excited to see which of the  masters, fresh from Worlds, will be entering show off their newly earnt rainbows.  There are also riders from South Australia, ACT, and QLD looking to make the trip.

5 days at a glance

Day 1-  Wed 27 Dec– Arrive at Dunc and realize you’ve had too much christmas pudding; squeeze into your skinsuit.  Also realize the couple days you had off for christmas were the perfect taper; feel amazing! race fast!  Brownie will find you, and for some reason you say Yes to racing the Madison.  You get to wear an ugly jersey, but you make a new friend.  Win!

Day 2- Thur 28 Dec- Venture into the inner west and find the Tempe velodrome, which is actually the Canterbury Velodrome, which is located in Earlwood.   Regret how hard you pushed on day.  Instantly forget your legs hurt when the Crowd arrives and the band starts playing.  The legs might hurt, but the cheers make you want to put on a show.  One Lap Screamers!  Food trucks, malted beverages.  #bliss

Day 3- Fri 29 Dec- Traditional Chill Day at Hurstville Velodrome.  All you need is wine, cheese, and a picnic blanket.   Wait what, day 3 of racing!  This is when fitness and tactics need to kick in.  The laps are longer, and the track is flat.  Hurstville is old skool track at it’s best.  It also has a new surface,  Sydney is spoilt for tracks.

Day 4- Sat 30 Dec- You’ve made it past the midpoint, and the finish line is in sight.  If you haven’t already, wake up early, go to the beach.  Arrive at Lidcombe velodrome refreshed and ready for another day.  It might be early Evening, but the bacon and egg rolls from the canteen go down a treat.  And it’s usually keirin night.   plenty of exciting racing to get stuck into.  You’ll also be gaining confidence in the madisons with your new BFF

Day 5-  Sun 31 Dec- Dunc, we meet again.  After 5 days of racing, the legs feel like lead.  History has shown that racing in all the grades is tight.  It’s time to put your game face on and Battle for the last remaining points.  Being back on the boards will give you that added rush of speed to get you through the afternoon.  Then Party!  Pizza, Beer, and presentations.  Along with friendly banter.  After 5 days of racing, you’ll get to chill, and relax before heading out to enjoy the Sydney NYE festivities!

The Sydney Christmas Carnivals, will be of great benefit for our northern, southern, and western neighbours.

•   Probably going to be showed up by NSW riders.

I missed racing last year, but was still involved.  It was a strong year, the last time I raced, it looked even stronger last year,  and can’t wait to get back into it this year.  The Christmas carnivals have a special place in my heart.  Some of my first racing was done at the carnivals.  And I’m pretty sure my first all female race was at the carnivals.  I was a bit of a speed skater, bit of an enduro, bit of a hipster.  But I loved it.

Early footage of my racing.

So this was a wheel race, and it all come together with 2 to go.  I was pretty new to racing, but the tactics where there.  After the bell, I accelerated took height, and used the banking to launch a sizeable attack.   In the field I had Tennille Falappi (who would go on to win a Junior worlds title after the carnivals) Jo Troutman, Renee Covington, and Jane Paine who were all very strong masters riders (they are still showing us young ones how to ride!) along with Emily Clark, and Jessica Marshal, Jr State team members.  The women’s Grade was a who’s who of racing.  After the 2011 series, I found it a lot harder to hide and go unnoticed in racing.  I had to get stronger, faster, and smarter.

History and Past Winners

In 2009 the Sydney Christmas Carnivals were run over the Christmas New Year’s period.   This meant that people got the night off for NYE, but still had to race on the 1st.
This year, the Queenslanders were heckled pretty hard via the RAW Track Forum.  http://www.rawtrack.com.au/index.php?topic=138.0 This set up a great relationship between the states and ensured racers from across the country travelled to Sydney to race.

Tennille Falappi made the long journey with her family from Cairns to once again take on the solid field of women. Tennille used the Sydney Christmas Carnivals last year as preparation for the National championships where she successfully secured two medals. This year she has succeeded in winning the series and we look forward to a solid performance later this month in South Australia, where she will be campaigning for a position on the Australian Junior World’s team.
Tennille went on to make the team, and win a Junior Worlds title in the Team Sprint

2012- In 2012, to accommodate the diversity and growing number of riders, B grade was introduced for select races (mostly sprint).

This year also saw an unknown rider by the name of Rebecca Wiasak dabble on the track.  Crafty described her as having a rubbish start, no tactics, but- boy oh boy- did she have a diesel engine.  She went on to dominate the series and then dominate the world!  A few years later (2015 and 2016) she became world champion in the IP (congrats Becs!)

2013-  After the word got out that the carnivals had 2 grades there was a bumper crop of female Athletes.  We had 37 riders across 2 grades.

A grade was solid with Jupha Som Net from the Malaysian National Team, Tian Becket fresh from winning a Junior Worlds title, Up and coming Juniors; Nicola MacDonald  Tayla Hunt and Tori Saunders… and me.

After coming second to Rebecca Wiasak the year before, I was determined to train and win 2013.  But alas, the field just got stronger, and it went down to the final placings, in the final race on the final night.  The racing in 2013 was epic!

B Grade was a great Breeding ground for some of the under 17’s and it gave the club riders, and masters riders better competition at a quality level.

*We all finished on the same points, but in the final race, I crossed the line first, followed by Tayla and Nicola.

I’m a little vague on details for 2014.  I left about halfway through the series to head to Canada to race Nationals.  All the racing I had done over the years gave me the confidence to head home, and race the new velodrome.  I was on fire! Crafty had me off scratch ahead of the Saunders sisters, MacDonald sisters, and Jess Laws (Tori Saunders and Nicola MacDonald went on to represent Australia at Jr Worlds, and Jess Laws won a masters World title) Although being off scratch sucked, it was a compliment.  I went on to win Bronze at the Elite Canadian nationals that year.

The Depth of field just keeps getting better.  After getting a Bronze in Canada for the 2014 nationals, I trained through RAW and became a multiple national medallist and National Champion in the keirin.  This meant I was totally unprepared for the endurance that would be required for the Christmas carnivals.  But enough with the excuses.  The field was impressively deep in both A and B grade.  A grade was dominated by Laurelea Moss (who went on to win everything at master’s nationals, set national records, then win everything at masters worlds, and set multiple world records! This is one determined Chick, a mother, and an absolute legend!)

And after a few years of having a Madison Challenge, 2015 was the first year to have a women’s grade.

Unbelievable! 2016 was smokin’ for women’s racing.  Before the carnivals started 1/3 of the riders registered were female.   Included in the field  was the 118th winner of the Austral Wheel race, the winner of the Scody Cup on wheels, multiple world masters champions past and present, along with national and world record holders. There is a Paralympic Silver medallist, multiple national title holders, and a large group of state team members from around the country! (5 states to be exact)  To top it off there were the regular RAW and Christmas Carnival riders.  These unsung heroes have, throughout the years provided gutsy attacks, and made sure the juniors were kept honest by racing hard.  Because these riders are there, another dimension is added to the racing.  And this is what makes the Sydney Christmas carnivals unique and exciting.  In 2016 I was officiating and not riding.  I was blown away by the quality.  See here for the full report.

New to 2016- the introduction of C grade in select races.  And a series long female grade for the Madison challenge!

When B grade was introduced the next year was a bumper crop of riders.  I’m hoping 2017 sees the continuation of that trend, and the 10th Edition of the Sydney Christmas Carnivals sets the benchmark for women’s track racing.

To attend the 2017, 10th anniversary celebrations of the Christmas Carnivals, register here.