Now before you all panic, I’m not getting rid of my pink bike.  I’m just getting a new frame in the same pink.

So Pikelet came into the world in September 2012 when i decided I was ready to get ‘serious’ about this whole riding thing.  Before Pikelet I was riding an old Kerry Hopkins Steel frame.  I loved that bike (like i do all my bikes) but the problem was i had too much power, and would clip the rear chainstay with my crank in a sprint.  It didn’t fit me too well and i looked like a goof (gee i love old photos when i was a noob) 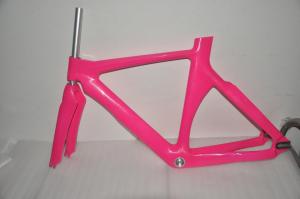 This was my first glimpse of a carbon bike.  i was so giddy.  Totally loved the colour and couldn’t wait to ride it.

going back to ‘how’ i found the frame- I went onto alibaba, and looked up ‘carbon track frames’.  I then chose the smallest frame i could find.   When I bought it I was told I could paint it ANY colour, so I chose 806C (hot pink!) I was then asked, are you sure? I said yes.  Then I was asked the whole bike? And I said yes again.  I was on a winner!  The timing of the frame delivery was perfect.  I got it after RAW, Just in time for the NSW state champs.  It gave everyone several races to get used to the hot pink before Paul Craft (the comedy genius behind the commentator at RAW) could rip into me at the Sydney Christmas Carnivals. 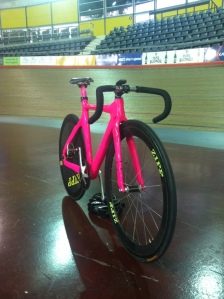 First race out at Dunc!

So in the last 3 years I have competed all around Australia and went to Canada in January to race nationals.  I have been on so many adventures, and I love the fact that my bike is bright pink.  It stands out and i can always hear commentators when they mention my name and bike, I even got a cheeky Pink Panther Theme played once.

The decision to get a new frame was not a N+1 decision.  Once again, it was bad fit.  My coach describes my position as “Postman Pat on his bike“.  and yes, looking at photos, my position is fairly rubbish.  I tried a longer stem, I tried more reach in the bars, more drop in the stem.  Although my position is better.  I still look cramped 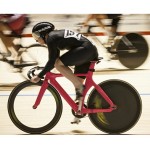 The new frame is going to be shipped in the next few days and my friends from The Rolling Fix are going to drop by my place, strip the components off Pikelet and help me build my new frame.  Once again, before you all get excited, i have already sold Pikelet.  She will be going to a very talented junior in Melbourne.  Cant wait to see the tow bikes on the track together. 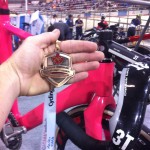 won the bronze in the sprint 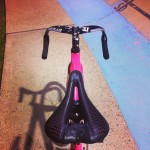 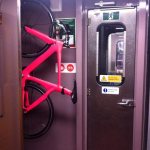 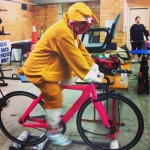