There I said it. I’m now going to have a whinge and be a complete sook. 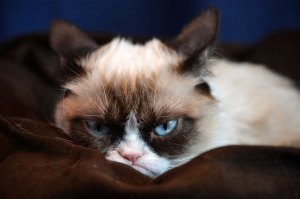 Usually I’m a confident city rider, but the last year has been tough, and a series of incidents has broken my commuter spirit.

I’m going to start with, I don’t ride my bike to piss people off. I don’t even ride for training most of the time. I don’t take main roads, and I don’t set out to brake the law (although I may run the occasional  red or jump on the footpath when I feel unsafe).
When I first started riding in Sydney 10 years ago, it was scary. Busses were my biggest concern, they seemed to pass with millimetres to spare. And cars, although careless and usually unaware of my presence, were not on a war path to see me off the streets. In the last 10 years, I have seen a lot of change. Numbers of cyclists have increased, cycleways have been built, new laws for my safety and protection have been put in place. But now, even more than never, I feel more vulnerable and fragile every time I ride to work/patrol/shopping/whatever.

I know I’m not wearing a helmet.  But I’m in Canada, and you don’t have to wear one all the time.

I ride my bike because it is the best form of transport for me. I don’t have a drivers license (I have had my learners, so yes I know the road rules) and because money is normally tight, I prefer to save cash and not jump on public transport.  Riding is also faster. To all the car drivers out there and public transit users, you’re welcome.

In reality it’s not that rosy. Sydney is weird, there is a general hatred for cyclists. The war on our roads is getting worse, not better. There seems to be a culture where everyone is that tightly wound and set in their ways, no one wants to give an inch of ground and the result is a simmering tension that is sitting at a rapid boil.

In NSW there are 3 main regions (according to me) The city of Sydney council area, the rest of Sydney an then outside of Sydney.

I’m just going to look at the two Sydney areas.

City of Sydney, cycleways education campaigns good signage. Here although traffic is heavier, I feel safest riding. In general drivers have improved. There is awareness of my presence. They look before crossing the cycleways and car v bike incidents seem less frequent. On the flip side the angry and aggressive drivers are worse. I get passed aggressively. I have been called a whole array of names, that if yelled at anyone but a female on a bike would be completely socially unacceptable. 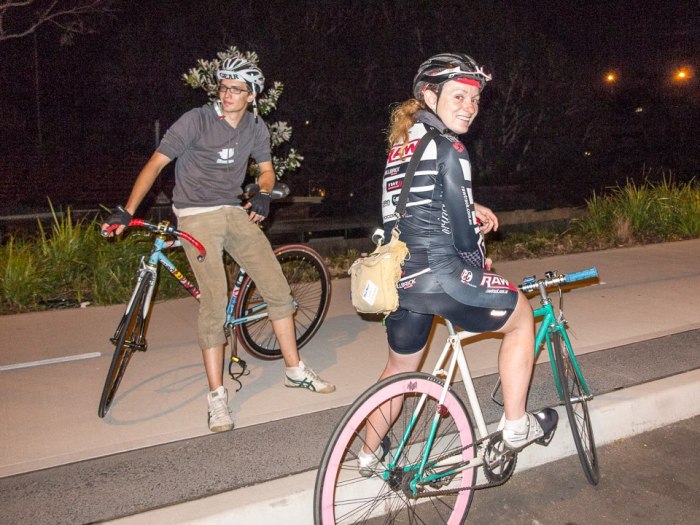 This brings me to the first incident that made me loose faith in Sydney. So I was riding home from a hot day on patrol. I didn’t take my usual route, that day I decided to take the shared paths. I was tired, my legs hurt, and a just wanted to cruise slowly home in the shade. Then, as I was passing Moore park I came across 2 guys walking in my direction, I waited for a bike to pass before changing lanes to go around them. As I went to pass, one dude put his arm out, so I swerved more and he lunged and collected me across my chest. I stopped and angrily said ‘you just f’en punched me! Why would you hit a girl?!!’ And he escalated it to how he would not respect me until I got a license and paid road tax. A few more expletives and he wished I would get hit by a car and die. It was a rapid escalation to a situation I needed to leave. First, the dudes mate was laughing at the situation, second, there was another group of guys, who saw the incident and choose to walk by.

This was a low point for me and cycling.  As I sat on the side of the path in tears talking to the cops, not one person asked if I was OK.  no one who witnessed the attack offered help.  I was tired, shaking, and a week out from the new  cycling laws in NSW, I felt this is it, this is how people feel, this is how I’m going to be treated.  The cops were called, and this is now a statistic somewhere in some report. For me, it’s sad, this incident shook me up more than I thought it would. When people asked me what happened I would break into tears remembering it. On the road I get twitchy whenever I hear an engine rev. Makes me wonder if that person is another person willing to act upon the hatred of cyclists.  Will that reeving engine be used to remove me from the road.  my hear rate goes up.  I’m scared.

What’s stopping that car from running me down from behind…A harsh connection, but this brings me to my second incident.

My commute to work has changed from 10km roll into the city, to an 11km dash into the inner west.  Going into the city I had a clear run along the Bourke St cycleway then the bus lane on Oxford st.

Now I have a green leafy meander up the cooks river and marked cycle ‘friendly’ backstreet’s to Strathfield. These supposedly friendly back streets coincidentally end up being rat run routes for drivers looking for alternate routes to the congested main roads.  And at 6:30am you would be surprised at the aggressive drivers on the horn in residential side streets, just to get to a red light that little quicker.

One road (Croydon Ave) in particular is uphill with a red light at the top. It is 1 lane, with cars parked on one side and a curb and gardens on the other. In the morning people are getting into the parked cars and flinging doors open. It is also not possible for me to ride in the door zone and a car pass me with 1m space. So, I take the lane. I do not do this to piss people off, I do this because I’m scared and I want to save myself from an accident. Then one day, this car was revving behind me. So I moved further into the lane to let them know I didn’t feel safe. At this point the car moved right inched closer, and hit me from behind while blasting me with the horn. It wasn’t enough to knock me off, but it was enough for me to wobble and move out of the way.  100m later at the red light I knocked on the window to ask ‘what gives’ I got a mouth full about how I always hold her up on her way to work and I needed to share the road and move out of the way. She said she wouldn’t have hit me if I shared the road.
The cops were called again, they had a chat with her, and in the follow up I was advised that she was now aware of the law (although grumpy that she was at fault)

As I ride these back roads it’s a mixed bag of interactions.  Some drivers wait patiently, others let you know they are there and they want you out of the way.  Maybe it’s because there are less cyclists along these routes, maybe the education campaigns aren’t there.  The City of Sydney is amazing with the billboards, bus shelter, and poster advertising.  The campaigns have made city drivers more aware of my presence.  The only stuff I have seen outside the city of Sydney is train stations.  The go together campaign lets cyclists know to give pedestrians 1m cars to give cyclists 1m and lets everyone know fines have gone up and cyclists will be punished.  The last poster is all that is getting attention.  Cyclists break the law and there is a zero tolerance policy for that.  the news laws should be followed and cyclists finned.  that will make them safer.

in reality it only adds to aggression and negative feelings.  It doesn’t make the drivers more aware of my presence or my right to be on the road.

And then I ended up under a truck.

Yep you got it, I was cycling along one of the cycle friendly back streets bright clothing, reflectors, lights (and my bell) indicating I was turning right round a round about, when a truck failed to see me, I couldn’t stop fast enough, so I decked the bike and thank god, ended up between the wheels, under the truck.  I saw the truck before the incident.  I saw him slowing down, I thought that he saw me.  In reality he was slowing for the turn, and was accelerating through the roundabout before he realized I was there.  He said he didn’t see me. I reckon he didn’t eve look.  He scanned for a car, and didn’t register that I was there.

That has ruined roundabouts.  I’m timid when I approach them now.  I look both ways, slow down, and even stop mid turn until I know the car has seen me and is stopping to give way.  And to the car revving behind me, no I’m not doing this to piss you off.  I nearly died and I’m genuinely afraid.  No amount of revving/horn blowing behind me will make me speed up into oncoming traffic(that may or may not stop to give way for me)

In general Sydney sucks. There is a level of anger that is so bad I describe to my non Sydney friends as the dark ages of cycling. 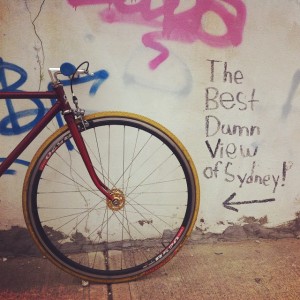 I do not ride my bike to piss you off. I’m just trying to get places alive. I’m sorry if I hold you up. It’s not my goal to add to the traffic. I actually go out of my way to ride cycleways, and when I’m not in them it’s because it’s safer (not in the door zone) or doesn’t exist (collage st). I don’t want to share the road with you. People who drive cars text, speed, drive tired, all these seemingly harmless activities can and will kill someone. Me being on a bike makes me more vulnerable, and with all my experiences I’m normally scared on the roads. I work so hard to fight it, but Sydney you got me. I have lost faith in the Sydney sider commuter humanity. I’m a confident commuter but I don’t know how much more I can take. 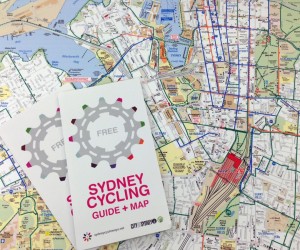 Another huge thanks to the City of Sydney, you are doing good things. To the state government and Duncan Gay; Please, I invite you, come for a commute with me. You need to ride, just once, it’ll help you understand what would really make me safer.