That’s what I am, and I am damn proud of that.

After I won nationals last year, I “retired*”.  To anyone around me, we all know that this is a joke.  I’m not finished, I’m not done, I’m not going to rack the bike.  This was the beginning of my ‘Victory lap of the World’ all I wanted to do was race everything and represent the maple leaf proudly!

For those reading along at home.  Yeah, there is a bit of an info gap in my blog.  I’ve been slack with my writing.  I just didn’t feel like it, I was too busy, whatever.  I’m back.  I’ll try to fill in some stories (and boy do I have stories) over the next few months.  But first, here is the story behind my stupid smile.  And the moment I truly embraced being enthusiastic race filler.

On August 21, 2019 I departed Sydney for the craziest adventure I had ever embarked on.  This was a moment 4 years in the making; and it was worth it.  But it almost didn’t happen.  When the registration was happening, the Japanese cycling Federation required all racers to either be on a national team, or a UCI trade team.  I was originally talking to Cycling Canada about my attendance, but that fell through.  I was devastated and reached out to my friends network on Facebook.  I have an amazing network.  A few weeks later I was in America, signing a pro contract with Tesseract Racing!   Barry Perkins is an amazing human.  He started the team with the aim to support high level racers and give them opportunities they otherwise might miss out on.  This was perfect, all I wanted to do was race.

Flights were booked, kit was ordered, rego was submitted, and on-site accommodation was arranged.    Because I had just returned from 7 weeks overseas, I kinda had to make this a long weekend.  My travel plans were-

It was insane.  But luckily, a few spare frequent flyer points came in handy, and I got an upgrade to business on the way to Japan.  Without that, I don’t think I would have survived the first day out there.

Thankfully technology is around.  I captured the crazy and posted it to my Instagram.  I have also uploaded it to youtube so you can view it in video form.

Then there was this.  This photo sums up everything.  This was my final race of the weekend.  It was the keirin heats for the Japan Track Cup 2.  Could I just mention heats.  They released the start list the day before.  When I saw it I was nearly in tears.  I didn’t know how to process it, how could I process it, I had 18h to process it.  I’m not sure if it helped, but I kept it to myself.  I told no one.  I didn’t want to advertise who I was going to be racing the next day.  I hoped by not drawing attention to the start list I would prevent any hype that would follow. 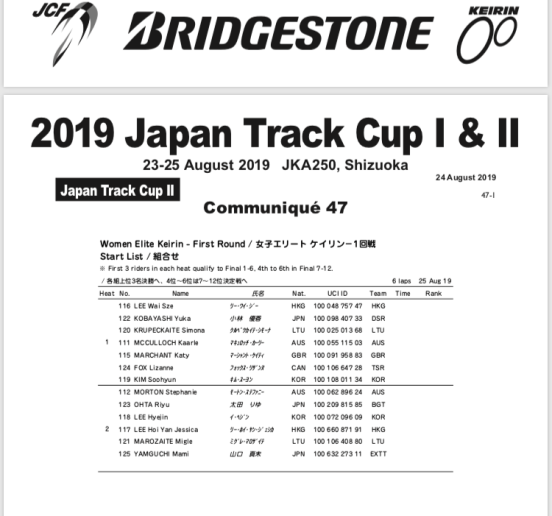 I remember the first time this happened to me.  It was the first time I raced Anna Meares.  When I saw that I had just qualified (8th) in a match sprint, all I remember is Carl glaring over at me and saying don’t you dare.  I then proceeded to get all giddy, have a fan girl moment, and totally loose my mind.  So when I felt the same giddiness, I remembered my experiences… totally didn’t learn, got even giddier, and absolutely lost it.  Sorry Carl. 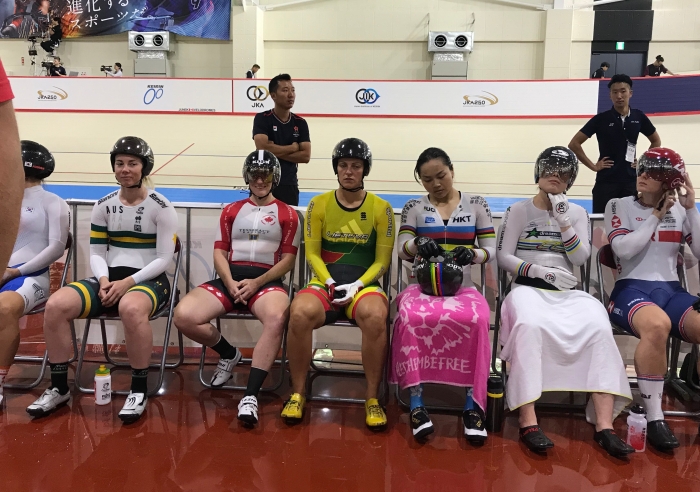 After a good night’s sleep (lol as if, I didn’t sleep) I arrived at the track ready for the keirins.  I did a few laps of the track to get the nerves out.  Changed to race gear, pranced, suited up.   My mind was everywhere, and I had this stupid smile on my face as if I was a kid in a candy store with a $5 note they just found.  I was in the first heat.  I managed to find a handler and went to bike check.  Sat down, then drew numbers.  That’s when this photo was snapped.  I just drew #4 and Wai Sze Lee drew #3.  Universe! Really! How. Am. I. Supposed. To.  Cope. With. This???? I lost it in a mush of fan girl all my dreams coming true.  Luckily my visor was on.  I was actually holding back tears of excitement.

The race was pretty non eventful.  I went into default mode.  Brain not work well.  I raced to win.  I sat on Wai Sze Lee’s wheel, then with one lap to go, I tried to ride around the bunch.  Standard Lizanne tactic, except there was no way, like actually no way I was ever going to ride around that bunch.  Brain was in win mode, legs had never raced in a field that hot.  Nope.  I came in last, but left that track with the biggest smile.  Then I allowed myself to have a fan girl moment.  I walked around the track, congratulated and chatted to all the girls.  I did it, I raced Keirins in Japan!

While I was over there, and when I got back, I was constantly being congratulated.  The first few times, I questioned it.

Friend- Congrats on Japan!
me- I didn’t win anything?
Friend- Oh, but you were so excited?
me- Yeah, I had a blast.

It took me a while, but I soon realized, even though I didn’t get a result, I won.  I got there, I raced, I had the right attitude.  Nothing in racing comes easy for me.  I work a full-time job while trying to be an elite athlete.  I have no full-time coaches or support.  I arrange all my funding, travel, and logistics.  When things work out, I’m grateful for even the smallest things.

In Japan, I didn’t come last.  After some woeful racing in America a few weeks prior, I was so thankful to be competitive.   Although my 200 time of 11.7 was nowhere near qualifying for the sprints.  In the Keirins I was in the mix.  I’m not the fastest rider, but as enthusiastic race filler it’s my job to make the fast riders work hard.  Hopefully, in pushing them, I can contribute to their success as riders in the next round of racing.

I just want to say it again- words can’t describe how much this meant to me.  Every time I talk about it I have a stupid smile.  While writing this, stupid smile.  But to Barry Perkins and Tesseract racing– thankyou so much for the support.  I really couldn’t have done this without you.

One thought on “Enthusiastic race filler”